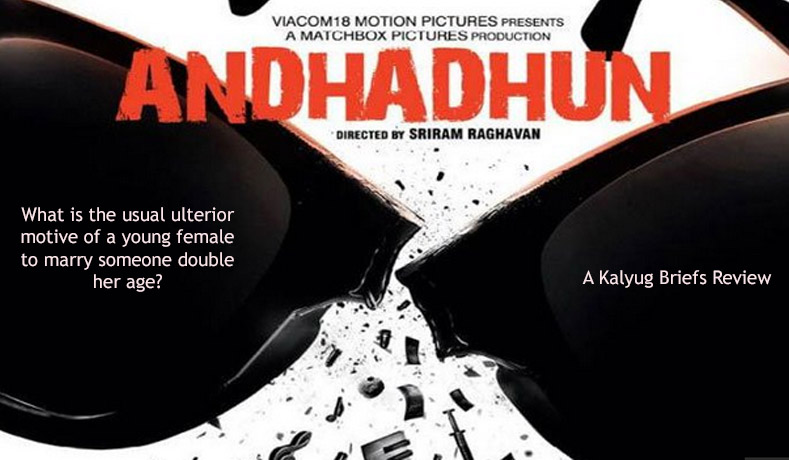 Film tells us a lot about the society and things that go on around us! They are as follows:

What is the usual ulterior motive of a young female to marry someone double her age?

Aged males should try to age more gracefully and not drool at girls as young as their grand daughters! They are mocked by majority and will surely be betrayed by the opportunist young female who lures such dullards by behaving wh*rishly with them.

Beware of celebrity husbands! They can bore you to death by their constant need of appreciation and accolade!

You can be a doting wife…but if your husband finds a sexier, sassier female with zero scruples to screw around with – he will jump for it.

Possessive doting wives can be very dangerous if they find out their husband’s infedility….


Don’t expect any compassion from poor people  who have been brought up in dire poverty – give a fraction of a chance, they will readily kill you for some money.

Even if you decide to turn a blind eye and a deaf ear to your surroundings….you will still be dragged into all the  nonsense that is going on around you!

What is the usual ulterior motive of a young female to marry someone double her age?


Money of course. You will never hear a young female falling for a retired clerk drawing a measly pension ! It is always some rich, esp. celebrity kind of creepy male who wants to show around that his libido is still intact and females as young as his grand daughters are attracted towards him! Clever females from greedy and shameless family backgrounds trap such dull males and feed their ego..and pretend to be very happy with them. Obviously no young girl in her senses will like some ramshackle toothless bloke jumping on bed with her – after consuming Viagra – so what they do is, they keep some young virile gigolos to take care of her sexual needs! So money comes from the old hag and fun comes from the gigolo! Wow womania….this is celebrated among greedy pig families !

Well folks, honestly I do not want to elaborate on the other points I have written – since the movie got released just day before yesterday…I can’t reveal the end – nor the plot….better go and watch the film…it is a hilarious thriller! Enjoy.