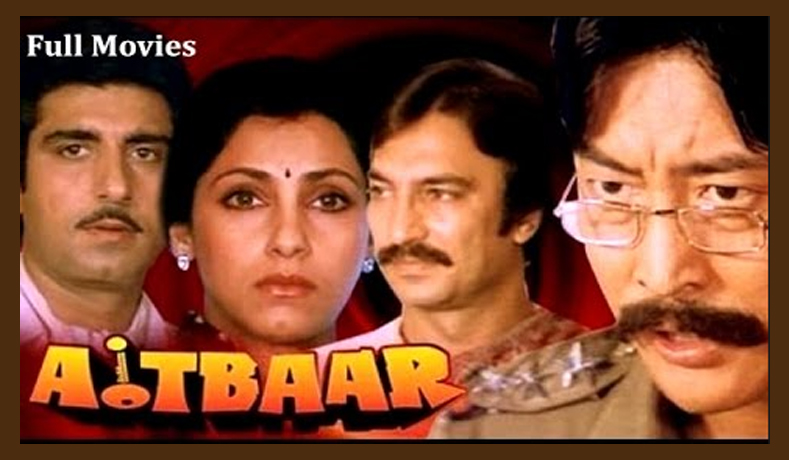 In this movie it has been indicated that even if the woman is educated, ravishing to look at, sensual, rich ..as seen in the picture, that does not mean that the man will change – he will still brutally bully her – maybe some last birth Karma phal – karmic debts – that human beings have to suffer so much …but still they do not learn to mend their ways !

The Story –
A father forces his daughter (Dimple Kapadia) to marry a greedy, cunning & calculating tennis player – Raj Babbar, who used to attend Stag parties (stag party ka matlab pata hai dear Indians? – where only men will go and enjoy. And no woman – ie.HOUSEHOLD WOMAN bole` to: mother, sister, wife, daughter woman will be allowed – except for of course the most sought after DASH woman ‘the reason why men wish to live’ since household women, usually, after child birth, kind of bloat up and it becomes rather difficult to have an effective ‘quickie’ – the three little letters which makes the world a merry-go-round-I am talking about the word starting with S and ending with X with a toothy E in the centre – I made use of this long procedure to state a simple word because I really do not know whether social forums allow usage of such dirty words!

The daughter was in love with a singer – singers , in India, are usually considered a loser in life – Suresh Oberoi. Dutiful daughter sacrifices love and makes papa happy by marrying the villain !

The villain husband misbehaves with her in every respect but since she is an Indian woman – she silently gulps down ‘poison thrashing’ given by pati parameshwar !

Suddenly hubby comes to know of Wife’s affair with ex-flame Suresh -kisi nazaar ko tera intezaar aaj bhi hai – – there is someone still waiting for you –  a song which, on hearing, the wife goes running towards the voice – with tearful eyes she begins to sing with him! — all this the villain hubby keenly observed -he was an intelligent Tennis player … remember Indians ? He thinks of a major plan –  not he actually the Director  – saw English movie ‘Dial M for murder’ and cut, copy, pasted it !so very original!

He tries to murder his wife but the wife murders the goon instead!

Inspector Danny does a good job of finding out the true culprit !

He kept following Raj Babbar after he framed his wife for murdering the hired goon – he had rung her up from the stag party – on ringing , wife had picked up the phone – she went on saying hello for 12-15 times – no response ! suddenly goon comes from behind -she picks up paper knife – and kills him instead – this can also be called ‘Husband proposes wife disposes’ – here I would like to thank the person behind the invention of paper knife – it saved a dumb wife from dying – and now people will ask me – why do u call her dumb ? well after murdering , screeching, etc. she picks up the hanging phone and hears her hubby’s voice !! She did not understand …later Inspector Danny probed her and asked her who rang her up and she said hubby darling – who had gone attending a ‘stag party’ – since although all men in India will agree that no one is as ravishingly, voluptuously stunning as Dimple Kapadia – but her husband wanted to taste an ugly prostitute dancing & singing at the stag party- as the profession of prostitution is alarmingly coming to an end and hubbies all over the world are trying hard to keep up the profession and feed the poor girls –  who earn by showing cleavage, hardened teats ….well well well …lets proceed with the movie : so the dumb Indian wife continues to have faith in villain husband and is shocked to see that it was the husband who only wanted her money and her death.

Conclusion : Duruyodhana & Dussahana kind of men cannot stand a stronger personality woman -which dimple was – although dumb enough but a no ‘ nonsense, decent wife’ so they ill treat her and want to finish her !