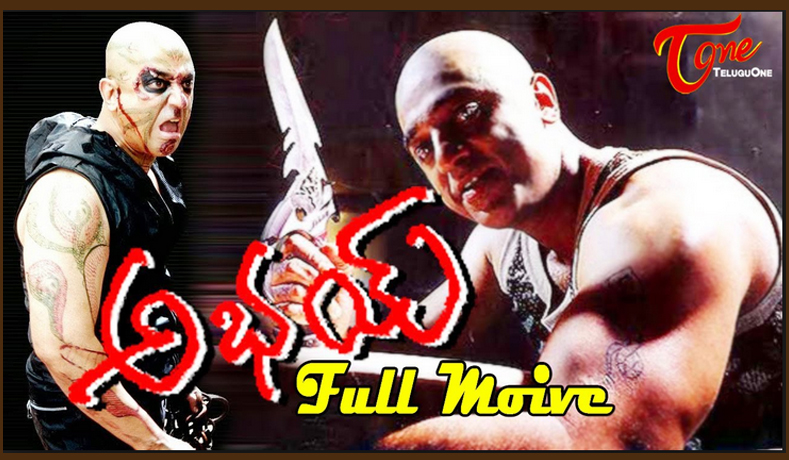 Movie : Abhay – meaning The Fearless or without Fear !

Father gets attracted to a Prostitute kind of shrewd woman who is great on bed – smokes and drinks (alcohol) much to the disappointment of the mother of the two twin sons.Usual fights in the family which the two sons quietly witness and cry silently. Mother dies – or gets killed – I do not quite remember – and the father gets the Whore – clever- great on bed – woman and marries her. This whore-woman actually had a secret lover who was poor so she had married this sex-starved father for his money. This the two sons come to know and thus the step – mother is extra strict with them.

The two sons befriend a street-magician and even learn tricks on magic and to connect to the other world.

The sons grow up – one is normal but the other one who was too attached to his own mother cannot get over the wrongs that his mother had gone through and thus becomes a maniac !He kills , behaves abnormally in public, causes treason etc and is put behind the bars.

In the mean time the normal son falls in love with a news reporter and introduces her to his maniac brother . The maniac brother sees the vamp woman in every woman and wants to finish the reporter-woman as he thinks she will also ruin his brother’s life like his step-mother.

Thus he escapes – and tries to kill every woman who catches his fancy..wrath !

Conclusion : Indian woman should either learn to become more whorish when it comes to handle sex-starved husbands or should not marry at all and give birth to such abnormal criminals because of which other people have to suffer.The common mass refuses to suffer for the idiocies of drunkard, pot bellied, frustrated, sex starved dogs like Abhay’s father (in this movie) !

There is a scene where the moods and the whims of a jazz dancer & singer is shown. She is least bothered about the people – reporters especially – who are standing in a queue to interview her …or else they will loose their jobs if they can’t get the live Interview of a dancer woman – who shows her pout, cleavage and hardened teats to entertain the Common mass !

After seeing the semi-arousal sexy number by this dancer the common mass needs some memories in order to spend their lonesome nights – this they get from the newspapers and magazines and repeat telecasts !

This dancer woman eventually meets her well deserved fate – she got excited to see Abhay’s triceps and biceps and invites him over for a drink – drugs her and he looses control – stabs her and kills her !…much to so many men’s disappointment ! but never mind it is all recorded…one can buy a dvd and watch her gyrate….
For example Parveen Babi, a muslim woman – once a most sought after sex-symbol died silently without anyone to claim her dead body !!…but does it stop people to watch her movies…and…. and neither did it teach any young model or actress what it is like to lead a sex-symbol’s life !!