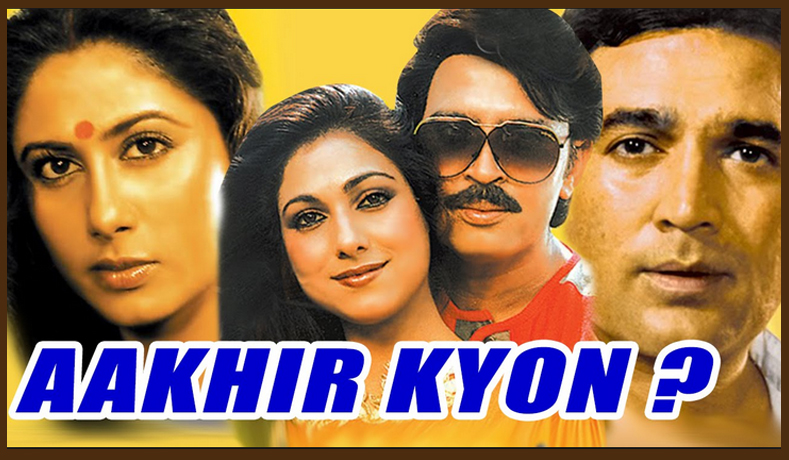 The Director and story writer of this movie are very perturbed by the current helpless position of women – specially oppressed women – oppressed in the hands of their husbands – the question is asked by a Camera man btw. in this movie !

Story of two step sisters –  one dark complexioned, Indian attire wearer, no-nonsense dame who knows her limit (played by Smita Patil )  and the other one a bright complexioned , modern and trendy flirtatious lass (played by Tina Munim ).

Now starts the real locha (trigger to a scandalous situation) – the bright complexioned step sis comes to her rescue -and snatches away her husband – since Smita patil was by now ‘pregnant..thus looking fat and ugly'(as said by Jim Carrey in Liar-Liar – woman, when pregnant, look like a cow !) snatching away hero was not a problem for her!

Smita then raises the girl child silently ..and becomes a successful writer !! Probably Writing Hindi TV serials – the reason why most of them are so sick, boring , impractical, shocking, sensational, full of betrayals, shameless etc !

If the girl is below average looking, dark complexioned, then she should not go for very fair and good looking men as they eventually drift away to more beautiful and fair complexioned lasses later in life.

So its better to be alone than to be stranded with a baby to look after and on top of that ‘put on weight and look uglier as it happens after child birth’ – I guess … by seeing how tensed & uneasy these media girls become when just out of pregnancy – dive to weight reducing centres – leaving the child with the maid / male servant – and the child imbibes Servant like qualities !!..grows up to serve the available lasses ‘after all the genes of the father cannot be denied!…like diarrhea which trickled down the jeans …genes.