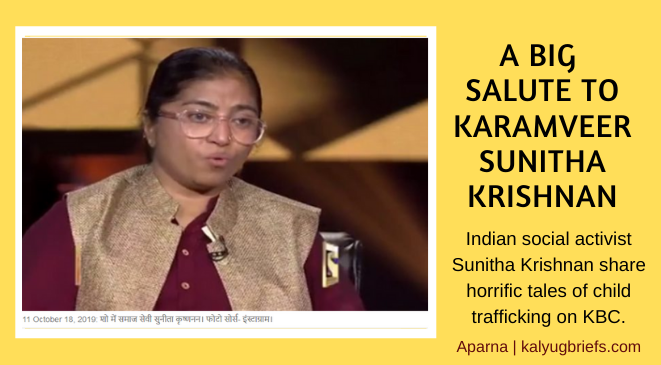 I watched this KBC episode last night – contestant – Sunita Krishnan! First and foremost – I SALUTE the lady for her commendable work on rehabilitating sex workers, rape victims, human trafficking victims!! A risky job because she is basically interfering with the most lucrative business – the Female Body and Sex!!

I was shocked when I heard her revelations –

And all the viewers were surprised and shocked and clueless about such pervert male psychology!

Although I am not desiring any Noble Prize but here are my 2 cents:

Poverty & unemployment sprinkled with 24/7 availability of hardcore/ regular/softcore pornography is the root cause of this perversion.

Males are anyways wired with a low threshold of sensuality – they can get aroused with a dead-picture of a semi-nude female on a magazine cover* – given this extremely low threshold of sex, it is no rocket science to understand what can happen to males when pornography is easily available to them 24/7 via Internet/ smart phones and cheap connection deals!

But will our society agree with this? NO they will not!

Will Advertising agencies stop showing female body as commodity? No, they will not – they are constantly on the look out for game-girls who strip in front of the camera even before being asked to do so! So when educated females from well-to-do families make themselves available and pose almost naked in front of the camera knowing very well what kind of vibes her pictures generate – what else can we expect from this society??

Will the Beauty Pageant organisers stop the bikini round? Of course not – the entire crowd is there just for that single round!! That was such a dumb question…..

So given the above circumstances where the educated and knowledgeable section of the society think that ‘skin sells’ and a female body is a commodity – how do you expect the BPL (Below Poverty Line)/ lower middle class or middle class people to put an end to what the corporate giants (giant in Hindi is rakshasa lol!) have marketed for so long?

When an educated, well nourished, shiny skinned, fair female of a rich family can dance wearing teat-lids and G-strings….why wouldn’t poverty stricken parents sell their new born daughters in the sex market…..or why wouldn’t pimps kidnap young girls and put them up for sale?

The Bad Ad. World and the Filthy filmy world create a demand for raunchy game girls dying to get laid – maximum Music videos show this….demand is created, supply has to be met with – thus start the flourishing PIMP and Prostitution business !

Come to think of it – the Red Light Areas do zero advertising…they rather keep a low profile ……yet they never have a dearth of customers…who is doing the advertising for them…..any guesses? Why the Advertising and the Film Industry of course – free of cost/charges….Hail Dullards!!