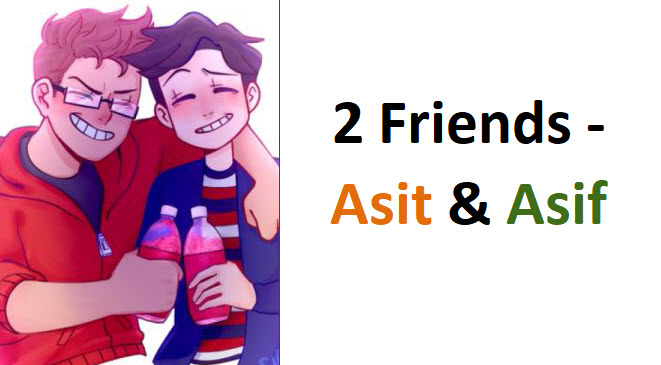 Their pervert neighbour took them to the brothel
They both found a new meaning to life
& at last understood the reason of their birth!
Sex everytime, anytime – for youth does not stay for long

Couple of months later, Asit’s wife got pregnant
So Asit started going back to his favourite place on earth – Brothel
Asif’s wife also got pregnant – so watching Asif’s boredom
His parents arranged for his second marriage

Meanwhile Asit’s wife came to know about his sex addiction
and she refused to sleep with him lest she dies of AIDS!
But continued to live with him –
she did not want to bring up his son all alone
He better pay for his school & education
So their home front was more like a war front
Screaming, shouting, bickering all the time

Asif saw a very young & pretty girl in the market place
He found out that she belonged to a poor family
He showed interest in marrying her
So at 38 he again got married – to a 16 years old girl!

Asif already had 5 sons and 1 daughter from his previous marriages
He waited for 2 more years before his 16 years old wife could be made pregnant
He was educated and responsible you see – he waited for her to turn 18!
All three wives were tad bit jealous of each other – but never showed it
Or else they would be beaten black and blue by the male members!
They had tried to voice their opinions earlier – but had got beaten!

Asit had 13 sons – one born to his wife and the rest 12 born to sex-workers
Asit as obviously oblivious of the existence of the rest of his sons
He also had 3 daughters – 6, 9 and 12 – all three of them were already working
as sex-workers of course – they were offered to paedophilic customers

Years passed, children became adults
and there were riots…
the oppressed, suppressed & dis-respected mass
decided to revolt against the atrocities done on them!

And maximum manpower for causing the riots
Rose from the red light areas!
A time came when the rebels  entered the locality of Asif and Asit
Whreas Asif’s sons protected their household like a mountain,
Asit watched helplessly as the army of goons broke open their house
The goons killed them all – Asit, wife and son!
Little did the goons know that their main 3 leaders-
had actually killed their father today!

Things cooled down, the cops came and calmed down the situation
Asif lamented for having lost his childhood friend Asit!
There were rallies conducted for world peace and ‘Say No to bloodshed’
While in the rally, Asif’s eye caught a well endowed voluptuous lady!

He found out about the woman
She was a young widow from the recent riots
He proposed to marry her and people really appreciated his magnanimous heart!
She did not even belong to his religion – yet he agreed to marry her!
She was barely 25 and he was 65!

Asif continued to proliferate till late 70’s –
after which he died of prostate gland cancer
By now Asif’s sons were also adults and they were happily proliferating
within the marriage walls though – raising their own individual armies!
Asit’s  family was over but there were many Asits who were still proliferating
but in the brothels – creating an army for the corrupt/ evil demons!
For only the corrupt/ evil demon will recruit the ‘orphaned by birth’ sons of sex workers!

About women and their ‘chums’ awareness! The film starts with a drama ...

Thappad – Not convincing enough! The wife wanted a divorce because the ...